I’ve talked loads on here about the fact that I’m running a marathon next April, but what I haven’t really mentioned (on here yet anyway, you’ll already be bored to tears of me talking about it if you follow me on Twitter) is that I’m also planning to do a duathlon in January and a triathlon in July, with the aim of continuing to focus on multi-sport events thereafter.

On paper it seems stupid, right? I mean I only bought a bike 2 months ago, and I’ve been swimming less than a handful of times in the past 15 years. Not to mention, training for a marathon and two multi-distance sprint events effectively AT THE SAME BLOODY TIME probably isn’t even possible, and I’m sure isn’t advisable.

And I’m scared – not just of doing the actual things- although christ knows there are a lot of fears there (what exactly happens in transition? How do I rack my bike? What happens if I get a puncture? I really do need to learn how to fix one of those) – but scared that people are laughing at the idea of me doing this stuff. ‘Who does she think she is? Getting a crush on a Brownlee brother (Jonny, obvs) and thinking she can become a triathlete?’; ‘that skinny, knock-kneed thing swimming in open water? Ha’; ‘I bet she’s just doing it for the attention’. And so on.

But, and here’s the thing: I’m not sure whether I’m scared that other people are thinking these things, or if they’re actually my own feelings. See, I’m still not sure how I feel about myself. I’ve heard people who used to be overweight and subsequently lost loads of weight say that they still feel like the overweight person and struggle to recognise the body they see in the mirror as theirs; and I guess that’s kinda where I’m at. I still feel like the old me.  The scrawny ugly duckling; the girl who wouldn’t dream of stepping out of her tiny comfort zone; the one who was too scared to even try to ride her then-boyfriend’s mountain bike (not a euphemism); the one who wasn’t strong – physically or mentally; the one who disliked herself intensely; the self-harmer; the girl that accepted that it was her fault her partner was violent. And that girl would never have even dreamed of doing any of these things. She’d tried to run once, got as far as the end of her road and that was more than enough thank you very much. Marathons and triathlons were something that super-fit athletes did, and she certainly wasn’t one of those.

But I don’t feel like that all the time. Sometimes I recognise how much I’ve changed, and I feel full of ambition, drive and confidence. Case in point – last weekend’s 10k race, where I finally managed to pace the distance correctly, finish strongly, get a time I was really proud of and finish in the top 5% of females. 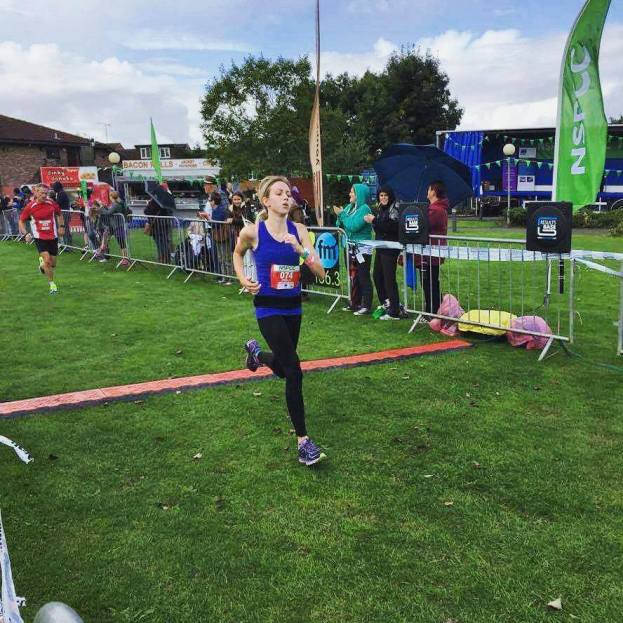 I spent the next 48 hours high on race-endorphins and utterly confident about the challenges ahead. It didn’t take long for the nagging doubts to creep back in though, and they’re definitely the most dominant right now.

At times like this I would usually turn to a trusty wanky quote to inspire me, and “if people don’t laugh at your dreams they aren’t big enough” seems to fit the bill nicely but I’m not sure I have enough courage in my convictions to live up to that, and ignore the (perhaps self-imagined) laughter just yet. What’s stupid is that I know I will do it. I WILL complete the marathon, and I WILL have done at least one triathlon by this time next year. And what’s more; I’ll do them well. So why can’t I get over the fear that people will think I’m a dick for even contemplating it? That I’m a dick for writing this post about worrying about people think?

This post didn’t really end up going in the direction I thought it would, and as such I’m not really sure how to end it, so I’ll stick with the classic.

10 thoughts on “On ridiculous goals”

Hi, I'm Joanna. This blog follows me as I run through life as a single parent, over-thinker, tea obsessive and marathoner in training. Join me - it might be fun!* *no promises.